THIS GUIDE IS CURRENTLY A WORK IN PROGRESS! Welcome to the new infantryman's guide to surviving the coalition session. The purpose of this guide is to introduce you to how the community of Coalition conducts warfare and what you need to know before the bullets start flying, rather than what the US military does in the real world. While our tactics, techniques, and procedures sometimes match and greatly pull from our real-world counterparts, it would be silly to teach you real-world tactics for a virtual environment like some "super-milsim" group.


With that in mind, take this guide seriously as you'll be expected to know and perform techniques written here in real time during sessions. 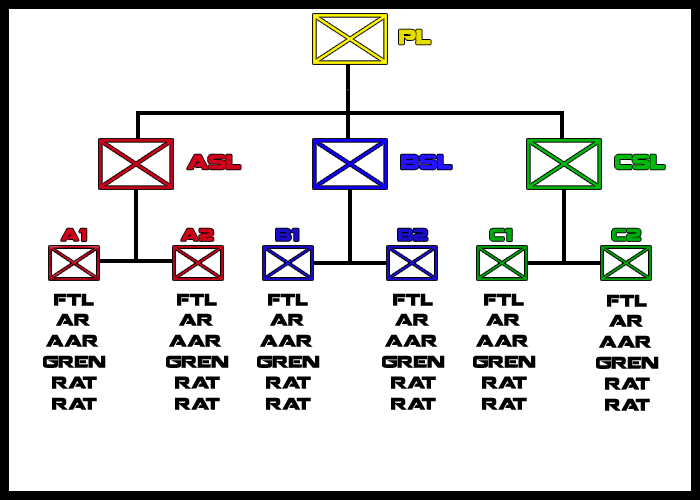 Regardless of mission and/or objectives, Coalition always uses the same platoon structure during sessions to ensure players have an understandable and systematic experience that promotes organization

There are five roles in each fire team that you must know:

This man is your direct line leader. All orders will stem from him. Always stay tactically near him.
Loadout:

The AR is the second in command and in charge of the first color team. If you're an AAR, stay with him.
Loadout:

The AAR's job is to spot for the AR, adjust his fire, and ensure he maintains a healthy amount of ammunition when possible.
Loadout:

The GREN's job is to serve as a maneuver rifleman with the added ability to lay extra indirect fire on to enemy positions. He is the second color team leader.
Loadout:

The RAT's job is to serve as a generally room-clearing or maneuver rifleman as well as destroy any armored assets the fire team may encounter. Stay near your GREN when possible.
Loadout:

A Coalition fireteam is broken down into two color teams, each with their own purpose:

If in a second team like Alpha 2/Bravo 2/Charlie 2, team colors are BLUE and YELLOW respectively to avoid radio mix-ups.

Red team serves as a base-of-fire (BOF) team with the FTL, AR, and AAR. The combination of an underbarrelled grenade launcher, light machine gun (LMG), and two sets of binoculars enables red team to provide command and cover to green team in a multitude of environments.
Green team serves as a maneuver element within the fire team. Their job is to clear buildings, flank if pinned, and generally destroy any vehicle threats that may happen upon the fire team.


A competent fire team leader will combine both teams efficiently to ensure they work together across multiple types of terrain.

While as a recruit during your first couple weeks in the community, you will not be able to take the Fireteam Leader (FTL) or Automatic Rifleman (AR) roles so that you can learn how to be a fireteam member before leading one.

There are a total of three formations you need to know:

By default, we use the wedge as a movement-to-contact formation. This formation allows for the maximum firepower forward and to
the rear if need-be, but suffers from a large cross-section from the sides. 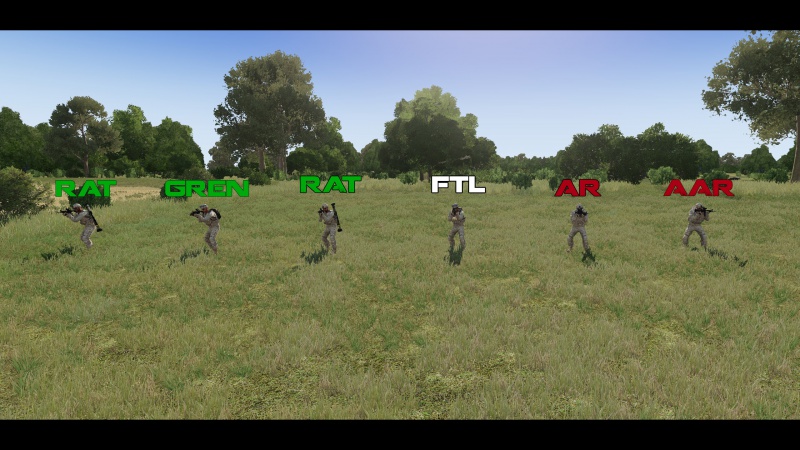 Not to be confused with the column, the line is commonly used as a reaction to contact from the wedge to get maximum fire power
forward. It is also used in forests or dense terrain. 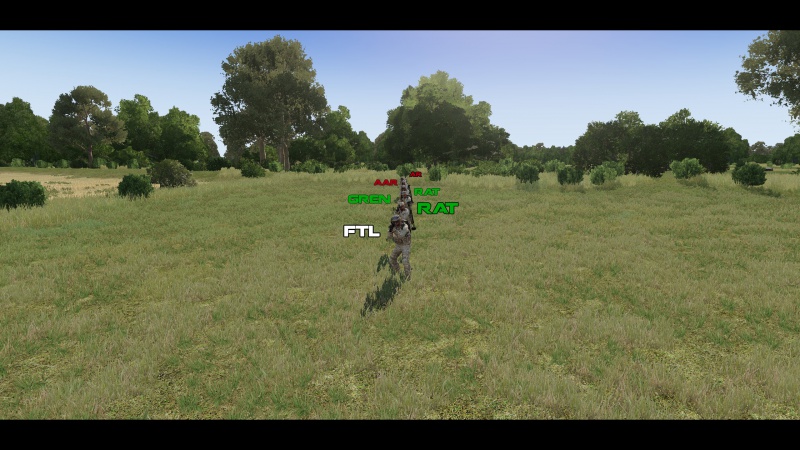 The column is used when traversing dangerous obstacles like minefields or when visual signature needs to be as low as possible.
Has great fire support to the flanks, but lacks in the rear and forward. Notice red team is in the rear in order to provide
maximum support.

Each formation consists of a minimum of 5 meters of spacing as displayed in the pictures above.
Your team leader will always instruct you to "push out" or "pull in" while moving in formation and you can utilize your STUI compass to help control spacing.

We utilize a mod called Advanced Combat Radio Environment, or "ACRE2" for short, to communicate while in game. This uses your normal push-to-talk key in teamspeak to transmit your voice into a 3D environment. It also adds new radio items to communicate long distances. A brief guide can be found here, but don't look to deep into it. You will automatically be assigned a radio per mission and it will be setup to be on your fire teams frequency from the start.

One of the best things you can do as a new infantryman is learn to communicate with your other fire team members. Regardless of roles, know when to and when not to speak on the fireteam radio to ensure maximum information flow reaches the right ears. Some guidelines:

For a more in-depth writeup of medical click here.

If injured in the field, press the "H" hotkey to bring up your medical menu. Immediately begin by clicking on the injured/colored limb and diagnosing the damage on the right sub menu. Utilize your basic medical items (2 elastic bandages/2 packing bandages/1 tourniquet) to stop any bleeding you may have. A list of injuries and bandage effectiveness can be seen to the right. 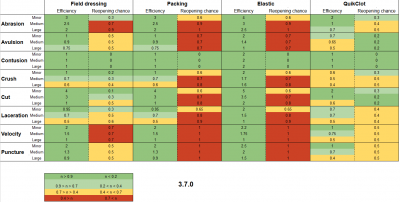 If you are in pain, have a broken bone, hear your heart beat, or have lost a substantial amount of blood, inform your leadership that you require a medic ASAP. Failure to do so can result in you going unconscious and being killed by cardiac arrest.

Otherwise once you're bleeding has stopped, you have fluids in you, and all tourniquets are removed, it is safe to continue fighting.

NOTE: "Stable" means no bleeding/has fluids/has stable heart rate. Just because you're limbs are bandaged does not mean you are stable!

Occasionally, your team leader may order you to do specific movements that you will need to know.

The AAR is the second man behind the LMG. His task is to support the Automatic Rifleman in the employment of his gun and protect him during its employment. While moving, you should stick directly with your color team member - who is the AR - at all times.

The Rifleman (Anti-Tank) is our primary means of defense against enemy armored vehicles. You are the fire teams, and often the whole platoons only anti-tank asset. Thus, your armament and your proficiency with it can make the difference between your whole team dying - or not. While moving, stay with the second color team member - the grenadier - at all times.

The Grenadiers weapon is the grenade launcher, most commonly fixed under the barrel. With it, he can use both HE grenades to fight enemies behind cover, in ditches or in windows and smoke grenades to conceal his teams movement. You are the second color team leader while moving.